Articulate Ghanaian actress, Lydia Forson has observed that President Nana Addo Dankwa Akufo-Addo has succeeded in embarrassing himself publicly following his refusal to heed to advice from a section of Ghanaians.

According to her in a Tweet, the President who is impervious to advice, was laughed at during the Women Deliver 2019 Conference in Vancouver over comments to the effect that women constitute majority of the population in Ghana but not much political action had been witnessed in their push for greater inclusion in Ghana’s political administration.

“We are not seeing enough dynamism and activism on the part of those who are seeking. I am talking about dynamism where it matters…electing people to Parliament, controlling political parties because they are the instruments by which our societies make decisions.

His comments appear not to have gone down well with gender activists like Lydia Forson who took to social media to jab the President in a thread of tweets.

“This is our President talking at the Women Deliver 2019 Conference in Vancouver. This pictures sums up how a majority of the women and panel reacted to his views on gender activism. When we talk you don’t listen, then you’ll go out there and get laughed at eh,VERY PUBLICLY! ????”

“And they want to believe they’re helping, but don’t get that they can’t without tackling the fundamental issues first.Sadly our president had to be educated on this very publicly” 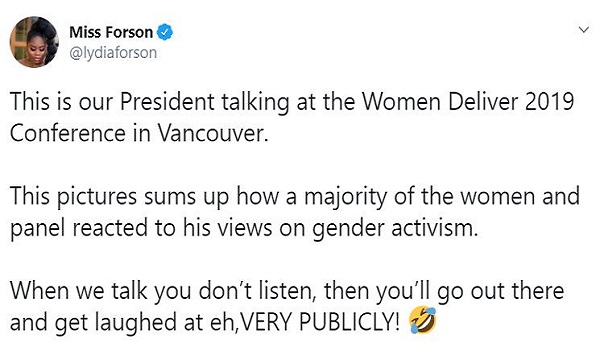 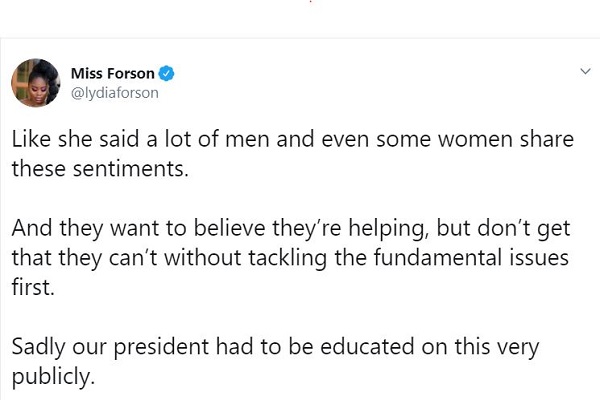